I’m still not over the Fujita Runa thing (long story short, too much evidence that makes management’s apology look really sketchy), but I really gotta shift gears and remember the positive side of NMB.

So here’s a Kinoshita Haruna Questionnaire that she filled out on Google+! For being 13 or 14 or whatever, she’s kinda quick witted…

Q: The place that calms you down?
A: My own room!

Q: What’s the #1 memory you have with Kanako?
A: The time we went to Singapore and played with the Merlion.

Q: Most interesting story of another member?
A: Hmm… lol.

Q: Did you attend a handshake event before joining NMB?
A: Nope!

Q: If you could be Nana-chan for a day, what would you do?
A: Use all of Nana-chan’s…

Titled “Yasashiku Yori Kiss wo Shite” (“Instead of being kind to me, Kiss me”), the song marks NMB48 Watanabe Miyuki debut as a solo singer after she won the AKB48 5th Janken Tournament back in September . While the title is definitely suits Miyuki what with her flirty idol persona, the 80s tune makes one wonder if this is right for a solo debut.

Watch the performances so far.

Staying true to the retro style, even the jacket artwork is done up to look like showa idol Matsuda Seiko.

In an interview, Watanabe Miyuki said her dream was to become a solo idol singer like Matsuura Aya. Now that her dream has been realised, she hopes to appeal to everyone. Will you be “fished” by her too? 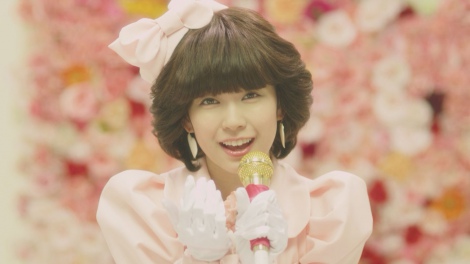 Watanabe Miyuki’s debut solo single “Yasashiku suru yori kiss wo shite”MV has be released. The music video shows Miyuki acting as an aspiring idol in the 80s, and her sad relationship with the guy she likes.

“This is my first solo music video so i’m nervous but it was fun,” said Watanabe. “The MV is set in the 80s, about a girl who dreams of becoming an idol and finally gets to appear on TV after passing an audition. Everyone should feel their heart pounding after watching it.”

This MV showcases Watanabe in different costumes – idol/uniform/cafe maid/casual wear/seasonal dresses. It was also revealed that the number “71” used in her audition scene was also the actual number she held when she passed NMB48 auditions.

Another perf from Milky Show!

It has been a long time since I wrote about something. This however will be different as today’s theme is about my not-so-secret last oshimen of SKE48 from the times, when I finally decided who will be the top 3 for me in that group. !WARNING! This post is massively loaded with images! Proceed with […]